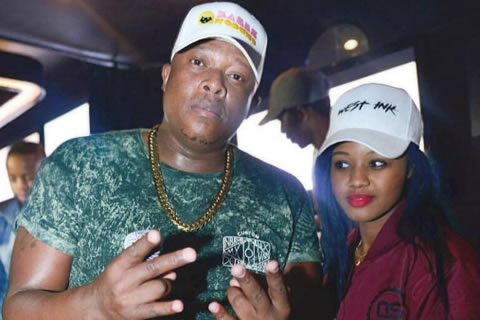 Mampintsha has lashed out at all haters of his lover Babes Wodumo, by expressing his frustration at constantly finding her name being mentioned in a negative light.

It’s no secret that Babes has hogged headlines for all the wrong reasons over the past few months.

From reports claiming that members of her father’s congregation had allegedly complained about her being ‘dololo’ in church, swirling controversy over her hit single Mercedes, and more recently, a man claimed to have ‘taken her virginity’.

READ: Babes Wodumo’s Reply To Man Who Claims To Have Broken Her Virginity Will Surprise You

Taking to Instagram on Sunday morning, Babes’ beau Mampintsha lashed out at everyone behind all the reports and speculations that have plagued the singer’s brief career.

He accused them of being “jealous”, and suggested that some might have gone as far as to bewitch Babes. However, he asserted that nothing will happen to her and further urged that people should leave her alone.

You can watch the video below: