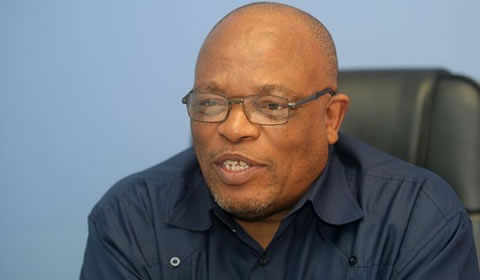 Muvhango boss Duma Ndlovu’s brother Christopher has been unceremoniously fired from the soapie, allegedly due to family issues.

Christopher, who was the company’s online editor, confirmed that he was pink-slipped from his job, allegedly without committing any transgression.

“Yes I can confirm that my services were terminated and no reasons were given to me. I was told when I enquired about my pay last month that the company no longer wanted my services,” he said.

Christopher said he then requested that the termination be put in writing before he could leave. However, when he arrived at work the following day, his access card had been deactivated.

He said he might have been fired because of his personal differences with Duma.

READ: Babes Wodumo Gushes Over Lover Mampintsha – ‘There Will Never Be Another You’

“I have been a loyal servant of the company for over 13 years. I have done my work with due diligence and I have never been taken to a disciplinary hearing,” Christopher said.

“I don’t know why I was fired but as siblings we sometimes have personal or family differences. But they were not that big that could have led to my dismissal but maybe that could be the reason for my dismissal.”

He however, said he had not spoken to Duma about his sudden dismissal.

Muvhango publicist Amanda Ngudle confirmed that they had fired Christopher.

“It was an executive decision for reasons whom is not at liberty to divulge (sic). He was informed at the beginning of the year for reasons that were communicated to him.

“He refused to participate in the processes and therefore the company took the liberty to exercise its authority to make a decision.”

Ngudle denied Christopher was fired after a family feud between him and Duma.

“Personal matters or family feuds cannot be dealt with in the boardroom. Hence HR processes that the company has tried to follow since January,” she said.