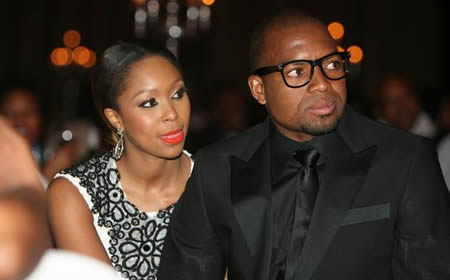 Minnie Dlamini and Itumeleng Khune during their happy days.

Despite a three-year on and off romance‚ Minnie Dlamini wishes she had “woken up sooner” during her relationship with Bafana Bafana goalkeeper Itumeleng Khune.

Before their split in 2014‚ Itu and Minnie were one of Mzansi’s favourite celebrity couples‚ but sadly they didn’t get their fairytale ending.

Now that Minnie is engaged and counting down the days till she walks down the aisle‚ she has reflected on some of her previous relationships. Talking to DJ Fresh on Metro FM‚ Minnie said that she wished she had “woken up earlier” to some of the problems in her relationship with Itu.

“I wish I had woken up earlier. Not in a bad way‚ it’s just like sometimes you look back and wish you had woken up sooner‚” Minnie said.

READ: Karabo Mokoena was ‘sacrificed’ in a ‘ritual killing’ by Boyfriend Sandile Mantsoe

She also denied that the couple were ever engaged‚ and said that rumours about Itu paying a million rand in lobola for her remains “the craziest” story she has heard about herself.

“That and the rumour that I was already married and pregnant‚” she added.

However‚ Minnie has left the relationship in the past and is looking forward to marrying her sweetheart Quinton Jones.

Insiders have told Mzansi Mirror that Minnie has taken control of planning her own big day.

“Minnie has taken charge of the planning. She is very involved. She’s not the kind of bride that is just going to have someone do everything. This is her big day.