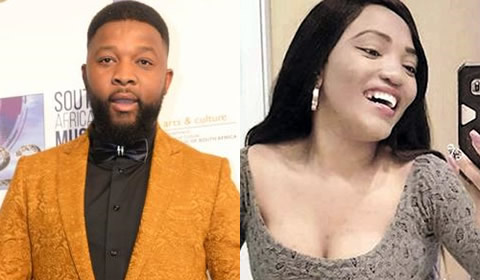 TV and radio presenter Luyanda Potwana might need to consult with Nyan’Nyan regarding his love life!

The talk show presenter is said to be scared because his ex-girlfriend, Siyasanga Mbambani, is rumoured to be sending him love messages – while a top politician allegedly keeps her busy.

Siyasanga made headlines when she exchanged raunchy SMSes with Minister in the Presidency, Jeff Radebe.

Sources claim Siyasanga has been telling the ANC bigwig she still loves him.

But she tells Luyanda the same thing, according to claims by an insider.

This source told Mzansi Mirror Luyanda was shattered when he read in the press that Radebe had confessed to inappropriate behaviour with Siyasanga.

“Luyanda is a Xhosa man and now he’s worried about his pride. They used to be in a relationship. Now, he doesn’t want to talk about details of their relationship,” the mole said.

The source claimed Siyasanga dumped Luyanda because he was supposedly broke.

“Siyasanga has certain expectations and couldn’t get what she needs from Luyanda. She claimed Luyanda couldn’t afford to support her lifestyle,” the source alleged.

This insider added that Luyanda had moved on and Siyasanga was doing fine.

But now she seems to be sending Luyanda mixed signals.

The source fears her ex will be dragged into “Siyasanga’s mischievous ways”.

“Luyanda’s trying to focus on his love life and career. His show is doing well. He doesn’t want what’s going on with his ex to dent his reputation,” the mole said.

Another friend close to the situation claimed: “Luyanda is scared Siyasanga might want to come back and ruin his life after he’s moved on from their long-term relationship.”

The source also claimed to have been shocked by headlines about Siyasanda’s shenanigans with Radebe.

“She was reserved when she was dating Luyanda,” said the source.

When called for comment, Luyanda confirmed he had been dating Siyasanga, but refused to talk about it.

“Yeah, I was dating her but I’m not going to talk about it,” he said.

She told the People’s Paper: “I can’t talk to the media right now, I’m not going to comment because there are lots of things happening.”