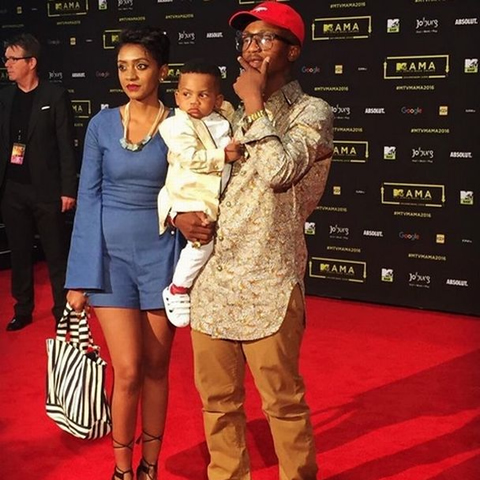 Emtee, his baby Mama Kendall Chinsamy and their son at the MAMA’s red carpet.

News coming in indicates that Emtee’s baby mama Kendall Chinsamy had a cat fight with a fan on chat platform WhatsApp and this has left the hip hop sensation MC caught between a rock and a hard place.

Emtee’s girlfriend Kendall Chinsamy allegedly had her claws out for a University of Johannesburg student, accusing her of trying to steal her man.

Vengwa said this after Emtee took her digits during a party organised by veteran DJ Oskido in Midrand last year.

“Emtee asked to take a picture with me and my sister and after that he asked for my number. I gave it to him innocently because I am one of his big fans.

“He never called me. After many months, I received a message from an 074 number and I didn’t know who it was. I realised when I checked the profile picture that it was Emtee’s girlfriend.

“All I want her to know is that I’m a fan and have no intention to sleep with Emtee,” said Vengwa.

Chinsamy declined to comment and put the phone down when contacted.

READ: Why Emtee Was KICKED OUT Of Muvhango

The Roll Up and Pearl Thusi hitmaker, whose real name is Mthembeni Ndevu, could not be reached for comment.

His boss at Ambitiouz Records Kgosi Mahumapelo did not want to comment on the saga.

“I’m a record label . I deal with corporate affairs regarding Emtee. I’m not willing to comment on his personal matters.”

“I was with the couple not so long ago. These allegations are false. Emtee and his girlfriend are cool,” she said.