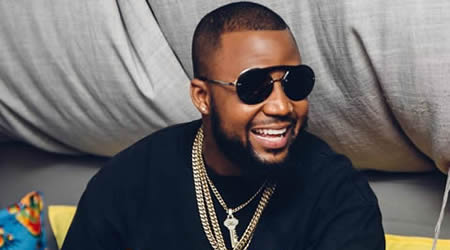 In a series of videos that has gone viral on social media, local rapper Emtee, real name Mthembeni Ndevu, is seen falling on his back while attempting to perform during a music concert in Lephalale, Limpopo, over the weekend (Read more HERE).

In one of the videos the ‘Roll Up’ hitmaker is escorted off the stage by the security guards and the police. Speculations started making rounds after the person who took the video insisted that the rapper was “drunk”.

Watch the video below as Emtee falls on stage in Limpopo;

Watch the moment Rapper Emtee fell on stage while performing during a music concert in Lephalale, Limpopo, over the weekend. https://t.co/QN9D9FETzM pic.twitter.com/Vprq5wwXKo

Rumours of the rapper being high on drugs spread like wildfire on social media, with fellow rapper Cassper Nyovest even weighing in on the matter. Taking to Twitter ‘Mama I Made It’ urged musicians to “stop playing with the gift” and “drop the drugs”.

MORE: “It has been one of my greatest dreams” – Black Coffee after performing at Apollo Theatre

“Sometimes we are hated for trying to show ni**s the light. God gave us a chance to make something of ourselves. We got families to feed ni**s. Let’s not play with the gifts. Let’s not laugh at each other as well, Let’s help each other. That cool sh*t is done. Drop the drugs!!!

Sometimes we are hated for trying to show niggas the light. God gave us a chance to make something of ourselves. We got families to feed niggas. Let’s not play with the gifts. Let’s not laugh at each other as well, Let’s help each other. That cool shit is done. Drop the drugs!!!

Cassper wasn’t the only the only one who was concerned about Emtee’s craft, author and businessman, Vusi Thembekwayo also tweeted about artists “respecting” their “craft”.

As a fan of SA Hip Hop: this is not a laughing matter. The music business (in general) & hiphop specifically has to address how young artists are guided & mentored.

I wish @EmteeSA had seen my interview with Fresh about “respecting your craft”.

I hope Emtee recovers from this https://t.co/53CuEmQSuq

While many are condemning the use of drugs and alcohol, others are merely urging the rapper to get help.

Emtee did say something we just ignored it pic.twitter.com/JXxs3w58BH

Have Y’all thought that @EmteeSA is an artist and spends days on the street without resting? Hustling for his family to eat and entertain Y’all? He’s human too, his body gets tired at times especially at such a busy weekend for artists, stop jumping into conclusion #Emtee

If you are close to Emtee’s management, his friends or his partner, if you know someone who has influence on him, speak to them to make sure he gets help. It has never been and will never be funny to see him do all of this. Help him.